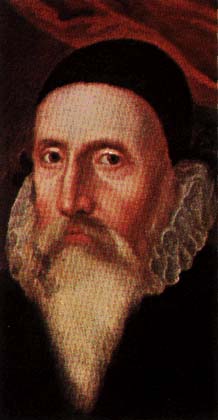 1. Visionary of the British Empire; coined the word Brittannia and developed a plan for the British Navy.
2. The first to apply Euclidean geometry to navigation; built the instruments to apply Euclid; trained the first great navigators; developed the maps; charted the Northeast and Northwest Passages.
3. An angel conjuror with his sidekick Kelley; the angels told him what Britain would have in their eventual empire; used an obsidian show stone which came from the Aztecs/Mayans and rests in the British Museum along with his conjuring table which contains the Enochian Alphabet he used as angel language.
4. Philosopher to Queen Elizabeth; did her horoscope; determined her coronation date astrologically; she came to visit him on her horse.
5. Founder of the Rosicrucian Order, the protestant response to the Jesuits.
6. An alchemist; hermeticist, cabalist, adept in esoteric and occcult lore.
7. Translator of Euclid and wrote the famous Mathematical Preface, mapping mathematical studies for the future, a kind of system of the sciences based on math.
8. Put a hex on the Spanish Armada which is why there was bad weather and England won.
9. Commissioned by Elizabeth to establish the legal foundation for colonizing North America; went back to Madoc, a Welsh Prince who took a group over to New England in the middle ages and established the first colony, and intermarried with the Indians, but with little or no historical trace but for the legend.
10. Instrumental in theatre arts and architecture.
11. Shakespeare depicted him as Prospero, and King Lear.
12. Sold the Voynich Manuscript, the most mysterious, a cipher as yet to be deciphered--the Everest of cipher studies--to the Holy Roman Emperor--Rudolph II--for a lot of gold. Resides at Yale in the Beineke Library. Probably an herbal and an almanac by Anthony Askham.
13. Had the greatest library in England over 4,000 books.
14. Biography by Peter French and everything by Francis Yates, his greatest advocate: cf. especially THE ROSICRUCIAN ENLIGHTENMENT.