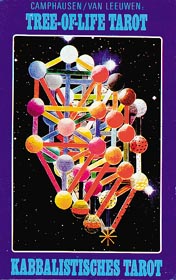 The Tree-of-Life Tarot visually differs to a great degree from all previously published decks, though it's certainly embedded in tradition as much as other cards.

Until now the many qabbalistic and astrological relationshíps and connections in the tarot have been published only as long and complicated lists in specialized books or marginally on some decks.

However, since the tarot as well as astrology may justifiably be seen as subsystems of the encompassing science of qabbalah, we aimed to create a pack of cards which, while serving the study and use of the above-named associations, could also be used in any kind of tarot operation.