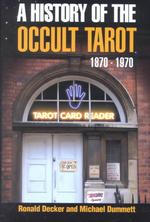 When the Tarot pack was invented in Italy in the early fifteenth century, it was simply a pack of cards, used for playing games. Esoteric interpretations of the pack date from late eighteenth century France, and were confined to that country for a hundred years, as described in A Wicked pack of Cards (1996) by the present authors and Thierry Depaulis. Nowadays, however, the cards are used throughout the Western world and not only for fortuen telling; for real believers the pack is a key to secret knowledge of the meaning of life.

Practised by secret groups such as the Order of the Golden Dawn, by magi such as Aleister Crowley, the Great Beast, and by psychics such as Dion Fortune, the occult interpretation of the Tarot pack is a woldwide phenomenon with countless devotees. The roots of the whole modern Tarot mystique lie in extravagant theories propagated by the occultists studied in this fascinating history.

The strange phenomenon of Tarot occultism forms a significant part of modern social history. In A History of the Occult Tarot 1870-1970, Ronald Decker and Michael Dummett bring to light its fascinating development throughout the world, and particularly in Britain and the United States.