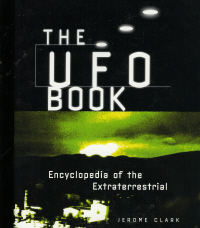 Fifty years after the famous UFO incident in Roswell, New Mexico - where witnesses claim to have seen a crashed flying disc and bodies of dead aliens being whisked away by the military - we are still mystified. Are reports of UFO sightings based on fact, misidentification, or elaborately contrived hoaxes?

According to a recent CNN/Time Poll, most Americans think the U.S. government has covered up evidence of alien visitations. What do you think?

Now you can explore the extraterrestrial controversy from every angle with Jerome Clark, an internationelly known investigator of anomolous occurrences. Clark delves into hundreds of intriguing topics, from claims of aerial phenomona in medieval times to the Heaven´s Gate tragedy. He also covers major investigators and reporters, detailed accounts of contact and abduction, and important UFO organizations around the world.